It’s Easter egg hunt time! The new outworld is an Easter event world filled with hostile Easter bunnies who drop spawn eggs. (read: Video Games) You’ll be able to get these spawn eggs for as long as this outworld is connected, which will be at least until the end of the month. 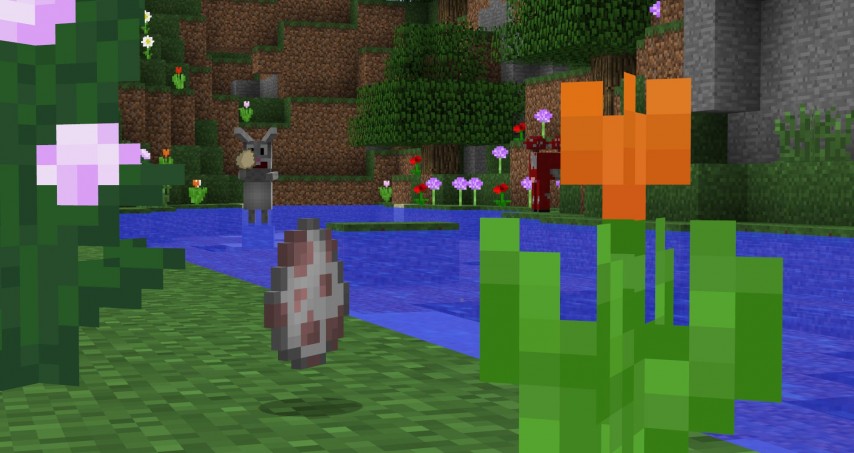 END_OF_DOCUMENT_TOKEN_TO_BE_REPLACED

This month has been all about Omega. The main road is now 1800m long and the east-to-west road has been started. Meanwhile some people have already created some fantastic structures. I hesitate to mention any one person in particular because I could be here all day mentioning the cool stuff I’ve seen. So I’d recommend you check it out yourself. 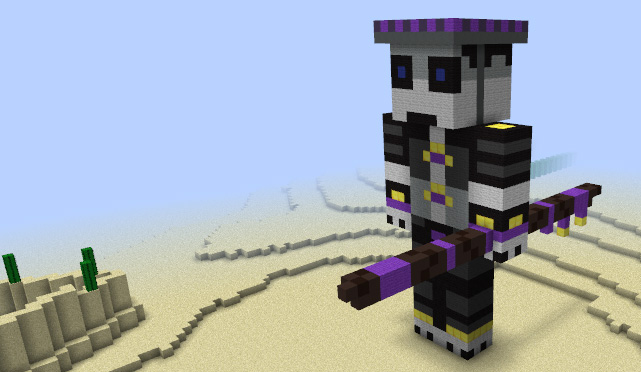 This is now the longest period between the release of a Minecraft version and the first build of Craftbukkit to support it. Over 500,000 lines of code changes in 1.7 has made it exceedingly difficult for the Bukkit team to sort it all out. They don’t even have something that compiles yet. It’s not just the Bukkit team. As of now there is only one mod released for 1.7.2. Countless more are waiting for MCP. The rush to release 1.7 before Minecon certainly didn’t help matters. The Bukkit team warns that even when they get the first build out, they expect problems due to issues in Minecraft 1.7.2. But anticipation for 1.7 hasn’t stopped us from making stuff.

While this list will naturally include more projects in which I’m involved, I’m going to attempt to summarize some notable updates across the whole server. Specifically these are some things that I think you should be aware of.

Game Plans for the Future

Yarr was a success. We found people really enjoyed the classes to pick from, so making more class-based games is going to be a higher priority for future PVP arenas. Here’s just a few of the games we have in the works:

– FFA class-based game with multiple arenas made by Froggerooh
– Add more classes to Yarr and improve the existing ones
– A few hunter type games with some variations, perhaps now with more classes
– More FrogWare stuff… always more FrogWare stuff. If MC had a kitchen sink, I’d add it.
– A SkyPirates variation by Raymond_II
– An AntFarm variation I’ve been planning on building
– What may be a Yarr variation by rivergod
– Multi-arena support for single game types
– Shared-arena support for two game types in the same space
– More spleef options, particularly modifier pickups like speed boosts
– Better timers for obstacle courses with more statistics
– A bigger and better Cluck
– “And more” is understating it

I’ve been too slow about supporting budding builders, and I think that needs to change. So I’m going to commit here right now to a future system that will enable everyone to get a space where they can build stuff for FrogPark too. This won’t be a free build plot system. While our main worlds offer a lot of freedom to build whatever you want, dev is not a traditional creative world. We may sometimes use it as a collaborative sketchpad for survival structures (like the new world’s thoroughfare), but we mainly use it for FrogPark creations.

Be sure to subscribe to this RSS if you want to stay up to date on what’s going on with the server. The vote here for the new 1.7 world name is still underway, submissions for the new 1.7 server icon are still being accepted, and soon I’ll post a list of ways you can participate more in the server.

For the remainder of the time 1.6.4 is on the server, we’ll be running DisguiseCraft. This means at any time you can disguise yourself as a mob or block using “/d [mob/block]”. You can even use this during PVP matches on Frog Park! Froggerooh and I had some chicken versus chicken battles on Guardian. (note: invisibility potions won’t obscure the nametag, and expect other little anomalies — be fair but have fun!) The timing of the 1.7 update is sort of overshadowing Halloween on the server, but that doesn’t mean we can’t have some fun. I really want to try some larger PVP games with mobs sometime this week.

I hinted at it in the previous post, but I should officially announce the opening of a new two player cooperative course in Frog Park created by Mortiseraphim over the last few weeks. He did an amazing job. It’s a beautiful course, but will require team work and some skill to complete.

We have a new class-based PVP arena this month, courtesy of Froggerooh. It’s pirate themed, with a new captain respawn mode. Each team has a captain class, and you can only respawn on your captain. If he dies, you won’t respawn until another player on your team picks up his hat and becomes the new captain! The classes include a powdermonkey (bombs and tnt), shipwright (sword, bow, healing potion), raider (diamond sword and speed), and buccaneer (pistols and blunderbuss). More improvements are planned, including a new class: striker. We’ve playtested it a couple dozen times already, and you can expect much mayhem in this ship vs ship brawl. You’ll need at least six players for the game to work.

When are we updating?

We’ll update as soon as a stable and compatible Craftbukkit build is available, as always. It seems that while some new features might not work right away (nothing that you should worry about in survival), I don’t foresee any show-stopping problems with the transition yet. So what does that mean for the timeline? 1.6 took about a week after official release, if I recall, so that’s a safe guess. I doubt it’ll be any later than the 5th of November. Craftbukkit needs to get relatively stable, but also a few plugins need to be updated as well. I can turn some off temporarily, but not all of them. Any Minecraft updates can slow this process down, so hopefully no last minute bugs pop up after release. In retrospect, I’ve updated within 1 or 2 days of the optimal time. So you can be sure that I’m doing it as early as reasonably possible.

With 1.7, we’ll be adding a new world to our server! This has been a long time coming, and I’m sure many of you are excited as I am. There are twice as many biomes in 1.7 as there are in 1.6, so there’s going to be plenty of diversity. And since I’m going to want to include all available biomes in one world, this means it’s probably going to have the largest surface area of any world. Early seed searching leads me to conclude that a 4000 radius will be needed.

We also have to decide on a name for that world. We’ve been using Greek alphabets so far, and “Theta” is the most popular choice right now. It’s not too late to put in your 2 cents, though. What would you like to name it?

I think creating a very large thoroughfare almost straight down the center of the map would be interesting. It would have room for a two way rail and room on either side for horses and pedestrians. People could use this thoroughfare to build off of, making it more structured but not limited like a circular city (Final City). What do you think? Any better ideas for publicly shared space and world infrastructure? We have at least two weeks to decide.